It had been my intention to use the Analogue Hobbies Painting Challenge to concentrate on building up a couple of Frostgrave warbands and a compliment of baddies and beasties for them to tackle.  But we've got within sight of the end and not a Frostgrave figure to be seen from me!

First up are the spell fodder...

As some of you will instantly recognise these are from Northstar's sprue of Frostgrave soldiers (though I can't swear there's not some cultist thrown in there).  As many have already said, this is a very nice pack, with some wonderful detail and character. 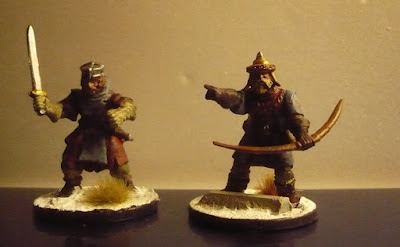 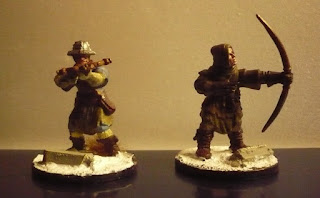 The spellcasters on the other hand are from Midlam Miniatures.  They're sold as suitable for 28mm games, but some might find them a little small.*

*At 25mm they're the weedy academic wizards, compared to the beefy mercenaries. 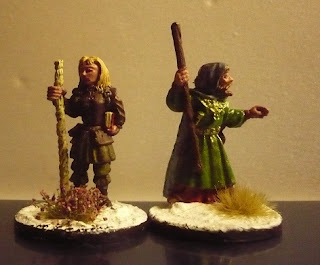 The bases are my usual 2p pieces with Vallejo Sandy Paste.  With the soldiers I added some sprue off-cuts to represent fallen masonry.  Then various grass and heather tufts (a mix of Tajima and some Gamers' Grass I got with my last order from Bad Squiddo - I think the former are much better value for money and will go with them again).

I haven't attempted to make the wizards school-specific, preferring to have a pool of figures I can choose from when I play.  Equally, I've not been too particular about what arms and equipment the soldiers have - today's Thug might be tomorrow's Thief.

Sadly, other than Smiler and The Butcher of Harvey's Grove, these haven't inspired me to do any detailed back-story.  Perhaps that'll come when I start creating the stat sheets and playing with them.  And perhaps best not to get too attached to the Dispensables anyway...
at 10:43