The Gods Smile on Me!

Before we get to what I'm talking about in the title, some important business...

Now, what's this about smiling gods?  Well it turns out that I'm a winner!

As many of you know, the guys over at Canister & Grape have been having a competition to celebrate their 50K mark.  I was lucky enough to win this rather splendidly painted figure.

I can't wait for him to arrive.  The Wife looked at him rather suspiciously and asked "What's SAGA?"

Secondly, James at the Gonzo History Project seems to have tired of the 'neat' formatting he was provided with by Wordpress.  He therefore announced that he would give prizes to the three best page submitted to him.  Luckily for me there were only three entries, so my cobbled together effort has earned a goodie bag.  See the entries here.
News from the Fourth Planet

It's been rather a long time since I posted about Mars.  Well, NASA has just released a rather nice series of pictures. 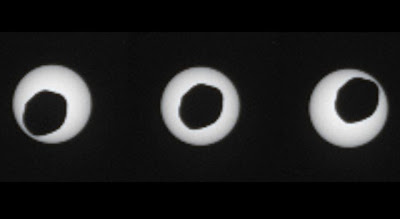 It's not, as someone claimed, a three-eyed Muppet.  Rather is the record of an solar incursion (an eclipse of the sun) by the moon Phobos taken by the Mars rover Curiosity.  I think it's rather awesome, but I'm a sucker for all things martian (and Martian!).  More information here.

It highlights the odd coincidence that Earth is such a distance from the Sun and our Moon that both appear the same size - thus when we have eclipses the Moon sometimes matches the Sun's disc exactly.
at 18:39