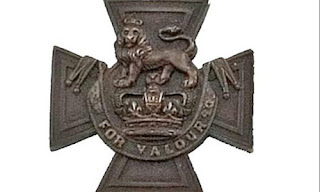 The government has announced that as part of the  commemorations for the centenary of World War I, memorial flagstones will be laid to mark every British born serviceman awarded the Victoria Cross.  The idea is that the first 28 will be unveiled next year to mark the 28 VCs awarded in 1914, and so on until 2018.  There are also grants to restore existing war memorials (a problem that has been concerning people for some time).

I've seen some cynical postings about this, but I think people might take it to heart, rather as they did with the painted postboxes for Olympic medalists - it's obviously designed to engender the same community spirit as we saw last year.  There's a memorial in my local church to an ex-choirboy who earned the VC - I wonder how many locals know about him?

There seems to have been quite a taste for minor public sculpture in the last decade - look at the success of the banana-cows in Liverpool, the Gromits in Bristol that Steve at Bleaseworld is currently treating us to and the elephants and gorillas in Norwich.
at 10:59