Welcome, a Plug and a Fact

Ain't this a nice biscuit? Sadly, I've not had it, only been sent it on Facebook. 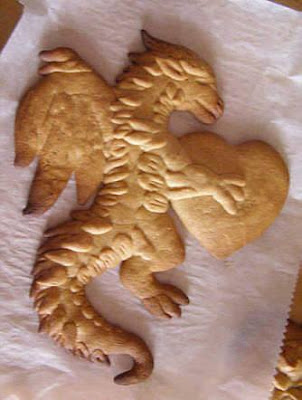 In all the fuss surrounding anniversaries, birthdays, etc, I've forgotten to welcome a new follower.  Hello to Millsy!  Millsy is one of those behind Canister & Grape, which as I mentioned the other day is celebrating its 50,000th hit with a giveaway.

The plug is for a blog that I've recently started following.  The Gonzo History Project is a very interesting view on matters historical (with a bias towards burial practices!) - a squint-eyed view.  Certainly worth the read, especially if you're interested in things archaeological.

Talking of history, it's time for a new feature <drum-roll> ... 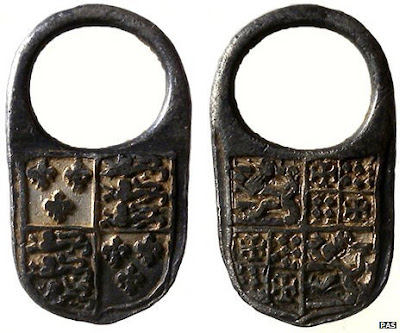 The tag put on a hunting hawk's foot to indicate ownereship is called a vervel.  Norwich Castle Museum has a larger collection of medieval vervels than the British Museum.

These snippets came from a story on the BBC website about the vervel above, which was found by a metal detectorist and, quite properly, declared under the Portable Antiquities Scheme. The arms are those of Charles Brandon,  Duke of Suffolk, chum and brother-in-law of Henry VIII.  A coroner's inquest is forthcoming to determine ownership (which is the usual, and ancient, procedure under English law).
at 15:44

Email ThisBlogThis!Share to TwitterShare to FacebookShare to Pinterest
Labels: Welcomes, What I Learnt...