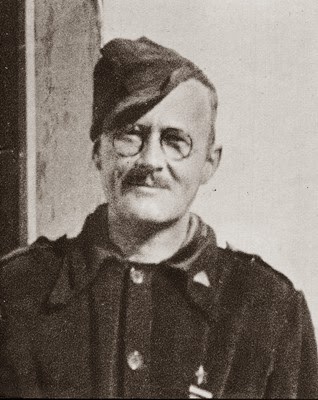 I'm sorry for what is basically a cut-and-paste post, but this caught my eye and it made me think of my fellow bloggers who are into VBCW.

I'm a subscriber to a 'Life of the Day' from the Oxford Dictionary of National Biography.  Basically, I get an e-mail each morning with an entry from ODNB.  More than half of them are interesting in one way or another.  You can sign up for the service (other social media are catered for) at http://global.oup.com/oxforddnb/info/freeodnb

The full entry for Wintringham, complete with bibliography, citations and legal notices is at http://www.oxforddnb.com/view/lotw/2014-05-15

I found the section on the Home Guard Training School particularly interesting.  It is often overlooked that the early cadres in the LDV were perhaps the most militarily experienced forces in British history - putting aside those who, like Wintringham, fought in Spain - most had seen active service in WWI.  I'd never heard of Wintringham or the training school before, but they seemed worth sharing. 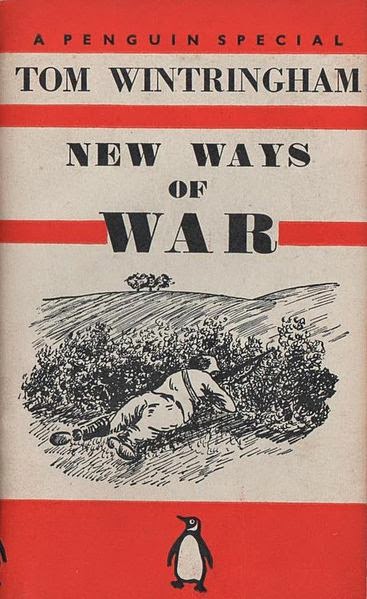 Wintringham,  Thomas Henry  [Tom]  (1898-1949), socialist activist and military theorist, was born on 15 May 1898 in Grimsby, Lincolnshire, the third child of John Fildes Wintringham (1866-1940), a solicitor, and his wife, Eliza Mapson Workman (1868-1937). Both his parents' families were nonconformist in religion and in politics, and Gladstonian Liberalism was to prove a lasting influence. Educated at Gresham's School, Holt, from 1910 to 1916, he postponed taking up a history scholarship at Balliol College, Oxford, in order to serve as a motorcycle dispatch rider in the Royal Flying Corps. Experience of the western front left him with a keen insight into the strengths, as well as the limitations, of military technology. Deeply sceptical of a hierarchical, authoritarian organization's capacity to wage war with any degree of competence, and appalled by the treatment of his fellow rankers, Wintringham proved a willing 'mutineer' in the summer of 1918. Early in 1919 he went up to Balliol College to read for a shortened course in modern history, which he completed in 1920.

While at Oxford, Wintringham found time to man picket lines and read Marx, and in 1920 he joined the Communist Party, making an extended visit to Russia. In the following year he graduated and began studying for the bar. A stuttering legal career ended in late 1925 when he was sentenced to six months' imprisonment for sedition, the consequence of articles published in Workers' Weekly, the communist newspaper which he helped Palme Dutt to edit.

After his release from Wandsworth prison in April 1926, Wintringham assumed the editorship of Workers' Weekly now renamed Workers' Life, and then in January 1930 he transferred to the newly launched Daily Worker. In succeeding years Wintringham established his reputation as an essayist, pamphleteer, and poet, writing for Labour Monthly and from October 1934 for Left Review, which he co-edited in his capacity as secretary of the British section of the Writers' International. Publication of Wintringham's first book, The Coming World War, in April 1935 confirmed his credentials as that rare phenomenon, an informed socialist commentator on military affairs.

Despite Wintringham's key role in the Communist Party during the 1926 general strike, and his subsequent success as a propagandist and polemicist, the 'bourgeois' Wintringham was viewed critically by those members of the party's central committee who were eager to demonstrate their proletarian credentials. Furthermore, throughout the years 1927-35, despite Moscow's indiscriminate labelling of all left-of-centre parties as 'social-fascist', Wintringham remained close to the Labour left and the Independent Labour Party. He urged an early end to exclusivity, and the party's approval of his involvement with Left Review was an encouraging sign. The Comintern's adoption in 1935 of a popular front strategy vindicated Wintringham's insistence that British Marxists could not remain indifferent to an indigenous radical tradition.

Wintringham's ambitions within the Communist Party were further undermined by a succession of extramarital affairs, rumours of which scandalized a puritanical leadership. In August 1923 he married a fellow party member and future doctor, Elizabeth Emma Arkwright (1894-1973). While still a medical student Elizabeth had been rusticated by her Oxford college after joining her future husband on his visit to Russia in 1920. One of their children died in infancy but responsibility for a surviving son failed to check Wintringham's interest in other women. The couple also had a daughter, born in 1931. The marriage staggered on until their separation in 1937 and divorce in 1941.

During the 1930s Wintringham established a reputation as the left's leading commentator on military strategy, which the Spanish Civil War offered an opportunity to put into practice. He went to Spain in August 1936, and in February 1937 led his novice troops up the hill at Jarama, a bloody baptism of fire for the volunteers of the British battalion fighting with the International Brigades in defence of the Spanish republic. Wintringham himself was wounded, though he recovered sufficiently to take part in the Aragon offensive in August 1937, when he was seriously wounded and invalided home. Over the next few months he wrote English Captain, a reflective account of his experiences in Spain which received considerable praise when first published in 1939.

While in Spain, Tom Wintringham met a New England journalist, Katharine Wise (Kitty) Bowler (1908-1966). Whereas Elizabeth Wintringham remained a card-carrying communist until her death, Kitty Bowler subscribed to a highly individual brand of revolutionary socialism which flew in the face of party dogma. The party disapproved of the attachment, and in July 1938, rather than break off the relationship, Wintringham reluctantly accepted expulsion, a breach rendered easier by the murderous machinations of the Comintern which he had observed behind the lines in Spain. The couple married in 1941, Kitty sacrificing her inheritance from her Boston family to do so. Wintringham's second marriage was more stable than his first, and produced a son. The family lived in genteel poverty, surviving largely on Tom's income as a freelance writer and political campaigner. In the first half of the 1940s this was quite considerable, ensuring a lifestyle of Surrey villas and fast cars, but after 1946 he earned little.
Wintringham's dissenting roots proved a powerful counterweight to Marxist-Leninism throughout his eighteen years in the Communist Party. Never having succumbed to the party's narrow sectarianism of the late 1920s and 1930s, he enthusiastically promoted a succession of progressive alliances from the era of the popular front to the onset of the cold war. He remained a highly regarded figure on the British left, enjoying the respect of former colleagues long after he had ceased to be a communist. The party remained remarkably mute whenever he attacked it for denouncing war with Germany as an 'anti-imperialist struggle' during the period from September 1939 to June 1941.

During the 'phoney war' Wintringham seemed an isolated figure, shunned by loyal communists and ignored by a Labour leadership sensing a share of power. War Office wariness of anyone who had fought in Spain, however expert in military matters, was subverted by Wintringham's swift response to the fall of France. Financed by Edward Hulton, proprietor of Picture Post, the magazine to which he contributed regularly throughout the 1940s, Wintringham set up the 'Home Guard Training School' in Osterley Park, west London. Inspired by the militias that held Madrid in the autumn of 1936, Wintringham saw the newly formed Local Defence Volunteers as the vanguard of a genuine citizen army. His instructors drew upon their experience in Spain to give two-day intensive courses in enemy tactics and guerrilla warfare. By September 1940 a reluctant War Office was obliged to recognize the 'Osterley reds'. Endorsed by those regular officers who had actually experienced combat, the course became the template for Home Guard training nationwide, with Wintringham regularly expounding the principles of a 'people's war' in Picture Post, the Daily Mirror, and a succession of books in the series Penguin Specials. With invasion seemingly imminent, Allen Lane in July 1940 rushed out New Ways of War: a short, practical guide to guerrilla fighting. It later became required reading for many African and Asian nationalists. Like George Orwell and J. B. Priestley, Wintringham insisted that radical politics and a deep love of one's country were not incompatible, and that the nation's united defiance in the face of imminent invasion signalled an early end to the old, now much discredited, order.

By June 1941 the military had established full control over the Home Guard, but Wintringham had already departed to complete The Politics of Victory, a detailed critique of communist opposition to the war. A hastily drafted preface acknowledged the German invasion of the Soviet Union as a fresh opportunity to build a progressive, anti-fascist alliance. In People's War, a Penguin Special published in August 1942, Wintringham urged Churchill's government to recognize the resistance movements' key role in opening up a second front. Later in the war he wrote two further books: Weapons and Tactics (1943), a best-selling history of warfare, and, under the pseudonym Gracchus, Your M.P. (1944), a controversial expose of Conservative MPs' voting records.

Despite the party's volte-face in the summer of 1941, Wintringham remained at odds with his old comrades. The communist leadership saw political advantage in respecting the coalition's electoral truce. In July 1942, however, Wintringham helped to found Common Wealth, the independent socialist party led by Sir Richard Acland which fought wartime by-elections and won three seats. In February 1943 he was narrowly defeated in the Midlothian North by-election, attracting 48 per cent of votes cast. He was only marginally less successful in the general election of 1945, contesting Aldershot in the absence of a Labour candidate. By then Wintringham was urging Acland to abandon the party's more strident criticism of Labour in the interest of left unity. Not surprisingly, therefore, he supported the entry of Common Wealth into the Labour Party after the election, but played only a modest role in urging the Attlee administration to 'keep left'. After his move to Scotland in 1947, his direct involvement in post-war politics was constrained as much by distance as by inclination.

Although Wintringham continued to write, the late 1940s were for him something of an anticlimax. He never regained the high profile he had enjoyed during the war, when in addition to his newspaper and magazine articles he had broadcast occasionally on the BBC. Suspicious of Anglo-American intentions towards the Soviet Union, yet disenchanted with Stalin, Wintringham looked to the United Nations as a future guarantor of global stability, and Beijing or Belgrade as alternative role models for those west European communist parties still loyal to Moscow. He sensed that the left in Britain was biding its time, waiting to coalesce around a dramatic new crusade. The Campaign for Nuclear Disarmament might have provided Tom Wintringham with a fresh cause to champion, had he still been alive and politically active in the mid-1950s. He died on 16 August 1949 after suffering a massive heart attack while holidaying at his sister's Lincolnshire farm, Owmby Farm, near Owmby; he was cremated at Leeds crematorium. The loss of this uniquely English revolutionary was mourned by close comrades, but was scarcely acknowledged by the wider public. Over half a century later Tom Wintringham's eventful life and innovative thinking is attracting renewed interest, a belated acknowledgement of the high esteem in which he was held on the left in Britain throughout the 1930s and 1940s.

And I'd never realised how subversive this shot from 'The Life and Death of Colonel Blimp' was!