On 5 August 1914 the Royal Navy's Harwich Force made their first wartime sweep of the northern approaches to the English Channel as far as the Dutch Coast.  The rear part - the cruiser HMS Amphion (Capt C H Fox) and destroyers from the 3rd Destroyer Flotilla - were advised by a trawler that a suspicious vessel had been seen "throwing things overboard".


Two of the destroyers, Lance and Landrail, were sent ahead to investigate.  About 11 am they sighted the Koenigin Luise (Cdr Biermann) a ferry that had been requisitioned to serve as a mine-layer.  The destroyers gave chase, signalling the rest of the force to join them.  Lance opened fire, the first British shots of the world war.


When Amphion and the the rest of the destroyers joined the fight, Koenigin Luise attempted to withdraw to neutral waters (leading the British into a minefield on the way).  This failed and, hopelessly out-numbered, Biermann gave the order to scuttle.  Koenigin Luise sank at 12.22, and 46 of the 100 crew were picked up by the British ships.

Fox later commented on the effectiveness of his gunnery:-


I commenced with salvoes from the three foremost guns with 7,200 yards on the sights; the first salvo was short and badly out for deflection; I made a lucky correction for the latter and went up 500; one round of the next salvo hit the top of the Keonign [sic] Louise's foremast and exploded. This was too much for the guns' crews, whom I previously imagined to be drill perfect; they started off firing as fast as they could, and it was a good minute before by dint of throwing things at them that I could stop them; the sights were again corrected and the order given for rapid independent — "Fire three rounds." At least two out of the three shots hit consistently.

The RN's first naval engagement was a victory - as the Official History puts it "and so we drew first blood".  Yet two incidents quickly followed that cast a shadow over this victory.


As Amphion and the destroyers continued their sweep, the destroyers sighted another ship of the same type as Koenigin Luise flying a large German flag.  They opened fire.  But this wasn't a mine-layer, it was the St Petersburg, a ferry carrying the German ambassador away from England.  With a diplomatic incident in the offing, Capt Fox sent a signal to the destroyers to cease firing.  Whether caught up in the excitement of the moment, or because the order wasn't received, the destroyers continued to shell the ferry.  Fox was force to put Amphion between St Petersberg and his own ships in order to stop the engagement. 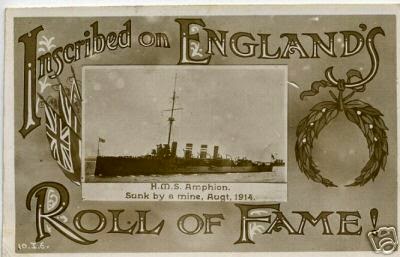 The second incident was more serious in its consequences.  At about 6.30 the next morning, while returning to Harwich, Amphion struck one of Koenigin Luise's mines.  The explosion caused severe damage, breaking the ship's back.  Surviving crew were given to abandon ship and were picked up by the destroyers.  151 members of Amphion's crew and 19 prisoners from the Koenigin Luise were killed.

British Casualties of the Loss of HMS Amphion