On Teapots, Tortoises and Trotters

In yesterday's rather down-beat post, I promised that I would post about some of the things that cheered me up this week.  One was getting three parcels of goodies, but I'll talk about them another time.

The first was a rather nice find in a local charity shop (not the one I've been working in, before anyone asks). 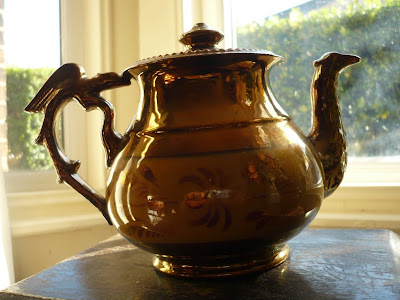 Now I know copper lustre pots are deeply unfashionable (and thus cheap - which is why I have quite a few pieces knocking around the house).  Yet this was criminally priced at £2.99!  And it's in excellent condition - neither the spout nor lid are chipped, though there's one on the rim.  I can only think that the rather silly women who run this particular shop just didn't like it.

This kind of lustreware was very popular in the Victorian period (I'd say this one was c.1870), though the process is much older.  Metals (gold, copper or platinum) are dissolved and the solution painted onto a pot: after firing, the result is a burnished metallic effect.  This was done to create patterns or, as here, to give the illusion of a metal body.

What I particularly like is the handle.  I suppose it could be an eagle, but I prefer to see it as a dragon.

I also have some more traditional charity shop purchases I got a couple of weeks ago.  That's traditional in the the sense of "Look what I bought for pennies: if I paint it grey it'll make great scenery!"  I've been holding on to the photos until I have some 'After' to go with the 'Before'.

One secret of lazy blogging is just to regurgitate interesting things I've read in the paper.  Yesterday's example was the story of Ali Pasha, which I promised you in my last post.


In April 1915, Henry Friston of HMS Implacable was serving as a stretcher bearer on X Beach, Gallipoli, when he picked up a couple of tortoises who were sharing a shell-hole with him.  He took them back to the ship, where they became mascots.  One was named Ali Pasha and when Friston left the navy in 1921, he passed him on to his mother.


He came back into Friston's care when she died in 1951.  In the 1960s, Ali Pasha became something of a celebrity, being used by the local press as the harbinger of Spring.  This was picked up by the national papers and he even made an appearance on 'Blue Peter'.  When he died in 1987, Ali Pasha's obit was carried by the Times, Daily Telegraph and AP.


The reason that the story was in the paper is that a book has just been published by Michael Foreman, a friend of Friston's son and a long-term collaborator with Michael Morpurgo.  He knew Ali.


Oddly enough, the theme this week over on the Historic Ship Geek Facebook page has been ships' mascots. One of my favorites came up again - Tirpitz the pig.  Tirpitz was one of the survivors of the sinking of the German light cruiser SMS Dresden in the South Pacific.  A sailor from HMS Glasgow jumped into the sea to rescue him, and he was adopted by the ship.  He was later mascot of HMS Excellent, the gunnery school in Portsmouth.  He was auctioned three times for war charities.