William Nathan Wrighte Hewett was born on 12 August 1834 in Brighton,  His father was Doctor William Wrighte Hewett MD, of Billham Hall, Near Doncaster, Yorks. He was a Surgeon and Physician to William IV. His mother was Susan Moore, daughter of the Revd John Maddy Moore DD, Prebendary of Ely and Chaplain to William IV.

The Crimea and Award of the Victoria Cross

In April 1847 Hewett was appointed Cadet on HMS Ocean. In May 1849 he was made Acting Mate on HMS Impregnable and served on several ships before being posted to HMS Beagle, a shallow-draft dispatch vessel commissioned for service in the Crimea War as a gunboat.  He was attached to the naval brigade at the siege of Sebastapol, being in command of the right Lancaster battery.

On the occasion of a repulse of a sortie of Russians by Sir De Lacy Evans Division on the 26th October, 1854 ... The advance of the Russians placed the gun in great jeopardy, their skirmishers advancing within 300 yards of the Battery, and pouring in a sharp fire from their Minie rifles. By some misapprehension the word was passed to spike his gun and retreat; but Mr. Hewett, taking upon himself the responsibility of disregarding the order, replied that 'Such an order did not come from Captain Lushington, and he would not do it till it did.' Mr. Hewett then pulled down the parapet of the Battery, and, with the assistance of some soldiers, got his gun round and poured upon the advancing column of Russians a most destructive and effective fire.

As ever, it's quite likely that this account is sanitised.  Another account gives Hewett's response as: 'Retire? Retire and be damned! Fire!'  For this, and for his actions at the Battle of Inkerman on 5 November, Hewett was one of the first naval recipients of the newly-instituted Victoria Cross.

Hewett was promoted to Lieutenant with effect from the date of his actions at Sebastapol. He was promoted to Commander on 13 September 1858, Captain on 24 November 1862, Rear-Admiral on 21 March 1878 and Vice-Admiral on 8 July 1884.

For much of this time he commanded expeditions in West Africa, the Arabian Gulf, Egypt and the Sudan, gaining in the process a reputation as the Navy's finest exponent of combined operations, being known as 'The Fighting Admiral'.  The breath of his campaign experience can be seen in his medal entitlement:-

As Commander-in-Chief of the Cape of Good Hope and West Africa Station, Hewett commanded the naval forces during General Wolseley's Gold Coast campaign.  He was created KCB in recognition of his services.

Hewitt, by now Commander-in Chief of the East India Station, arrived at Suakin on 16 December 1883 in his flagship HMS Euryalus.  Following the disastrous first engagement at El Teb, he was put in command of the 150 seamen, 400 Royal Marines and six Gardiner guns that comprised the naval brigade.  At Second El Teb, he personally commanded the naval brigade from the square and led a charge at swordpoint.  He was appointed Governor of Sudan by Baker Pasha and led the negotiations that allowed for the retreat of troops though Ethiopia and the engagement of Ethiopian troops against the Mahdists. 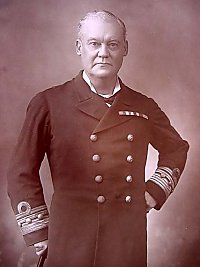 Hewitt took command of the Channel Fleet in November 1886, but soon became seriously ill.  He died at the Haslar Naval Hospital on 13 May 1888 and was buried at the Highland Road Cemetery, Portsmouth.