Princess Anne (full name Anne Elizabeth Alice Louise) was born on 15 August 1950 at Clarence House, London.  She is the second child and only daughter of Elizabeth II and Prince Philip.  She was educated privately and at school in Kent.  She showed an early interest in equine pursuits and is renowned as a horsewoman - she won gold and silver medals in three-day eventing and competed at the Montreal Olympics in 1976.  It was through these interests that she met her first husband, Capt Mark Philips, and the tradition is carried on by he daughter, Zara (who competed in the London Olympics.

Another interest, apparently originating from childhood holidays in the Western Isles is pharology, the study of lighthouses.  She is Master of Trinity House and Patron of the Northern Lighthouse Board - the official bodies which maintain and govern lighthouses in the UK.

Princess Anne is one of the busiest members of the Royal Family, being the patron of over 200 organisations, and she carries out about 500 royal engagements and public appearances per year.  She is particularly active in Scotland.  She is known for her no-nonsense approach and disdain for anything touching on celebrity.  The former is perhaps best exemplified by her response to gunman who had just shot her driver and bodyguard and told to get out of her car during a kidnap attempt - 'Not bloody likely!'


In June 1987, Princess Anne was given the style 'Princess Royal', the seventh holder of the title reserved for the eldest daughter of the monarch.

Anne's most prominent (most photographed) honorary appointments are her naval roles and as Colonel of the Blues and Royals (also known as Gold Stick) - in the latter appointment she attends many state occasions, including Trooping of the Colour.

Colonel-in-Chief of the Royal Australian Corps of Signals

Order of the Thistle
Extra Knight, 2000 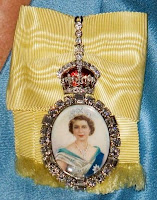 Service Medal of the Order of St John, with (?two) gilt bars. 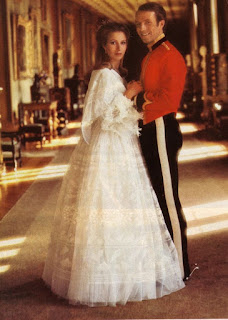 Mark Phillips was born on 22 September 1948, the son of Major Peter William Garside Phillips and Anne Patricia Phillips (née Tiarks).  After Marlborough, he passed out from the Royal Military College, Sandhurst, in 1969 and was commissioned into the Queen's Dragoon Guards.  He was promoted Captain in 1975 and resigned from the army in 1978.

He met Princess Anne at the Munich Olympics, where he was a member of the three-day event team (winning a Gold Medal).  They married on 13 November 1973 at Westminster Abbey.  He turned down the offer of a peerage (an earldom was probably on offer).  The couple had two children, separated in 1989 and divorced in April 1992.

Prince Charles and Prince Andrew are reputed to have given Philips the nickname 'Foggy' - because he was wet and thick.

He entered the Royal Navy in 1973, attending the University of Durham on a naval scholarship.  He had several sea-going appointment (including a spell as navigating officer of HMY Britannia)  before being appointed equerry to the Queen in 1986 and command of the frigate Boxer in 1989.  He has held several staff appointment in the MoD, including Assistant Chief of the Defence Staff (2004-2007)  and  Chief Executive of Defence Estates (207-2010).   He retired from the Navy in 2010 in the rank of Vice-Admiral.

He and Princess Anne were married at Crathie Kirk, near Balmoral, on 12 December 1992.

As a board member of the CWGC he has taken a prominent role in ceremonies commemorating the centenary of the First World War.

General Service Medal (1962-2007), 1 clasp (Northern Ireland) with Mention in Dispatches for his actions in command of HMS Cygnet on anti gun-running patrol, 1982

Anne had two children by Mark Phillips: Peter (b. 1977) and Zara (b. 1981).  As female-line grandchildren of the Sovereign, they children were never eligible for the style 'Royal Highness' or the title 'Prince/Princess' under the terms of George V's letters patent of 1917.  They have been granted no other title.

However, Zara Phillips was appointed a Member of the Order of the British Empire (MBE) in the 2007 New Year's Honours List for her services to equestrianism.  She was a member of the medal-winning team at the London Olympics.
at 16:09