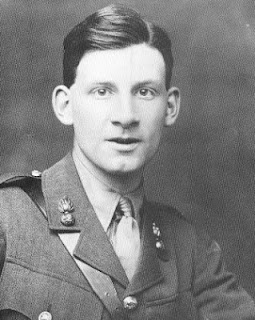 Today is the anniversary of the death at the age of 80 of the soldier-poet Siegfried Sassoon in 1967.

Probably his most important piece of writing was the Soldier's Declaration, written in July 1917.


I am making this statement as an act of willful defiance of military authority because I believe that the war is being deliberately prolonged by those who have the power to end it. I am a soldier, convinced that I am acting on behalf of soldiers. I believe that the war upon which I entered as a war of defence and liberation has now become a war of aggression and conquest. I believe that the purposes for which I and my fellow soldiers entered upon this war should have been so clearly stated as to have made it impossible to change them and that had this been done the objects which actuated us would now be attainable by negotiation.

I have seen and endured the sufferings of the troops and I can no longer be a party to prolonging these sufferings for ends which I believe to be evil and unjust. I am not protesting against the conduct of the war, but against the political errors and insincerities for which the fighting men are being sacrificed.

On behalf of those who are suffering now, I make this protest against the deception which is being practised upon them; also I believe it may help to destroy the callous complacency with which the majority of those at home regard the continuance of agonies which they do not share and which they have not enough imagination to realise.

Sassoon faced court-martial, but Robert Graves intervened, giving the authorities the get-out of declaring the Sassoon was suffering mental illness.  He was accordingly sent to Craiglockhart Military Hospital, where he was treated and befriended by W H R Rivers and met Wilfred Owen, on whom he was to have a great influence.


Craiglockhart War Hospital for Officers was established in 1916 in the requisitioned Craiglockhart Hydropathic Institute, near Edinburgh.  It specialised in the treatment of neurasthenia ('shell shock').   Rivers  wanted his patients to talk about their experiences and face their fear and the horror of what had happened to them - the ‘talking cure'.  In doing this Rivers became a life-long friend and mentor to many of his patients (including Sassoon).  He conducted three sessions a week with Sassoon, in which he also tried to get him to return to the battle front. Rivers considered shell shock to be an illness and treated all of his patients as individuals who needed special care. He also had ethical concerns about his role - he felt that curing patients was problematic when they would be returned to the front line, where he believed they would be in danger of having another breakdown.

Rivers, Craiglockhart and the talking cure are at the core of Pat Barker's excellent Regeneration Trilogy - with Sassoon as a major character in the first novel and Owen's fatal return to France featuring in the last.

Born in 1864, William Halse Rivers Rivers was the son of a Church of England priest, who had a side-line in speech therapy (one of his patients was the Revd Charles Dodgson), his uncle was the founder of the Anthropological Society (later the Royal Anthropological Institute of GB and Ireland).  William had a stammer and lacked visual imagination, both of which were to inform his later works.  He had intended to attend the University of Cambridge to study classics, but the necessity of earning a living led him to medicine, which he studied at London University  He application to join the RAMC on graduation was rejected on health grounds, instead he decided to go to sea as a ship's surgeon (a popular route for medical graduates in the nineteenth century).  On graduating as a MD and becoming a FRCP, where he began specialising in neurology and psychology.  He worked at Barts, the National Hospital and Guy's before being appointed to a lectureship at Cambridge, where he became a Fellow of St John's.

In 1898 Rivers headed the Torres Straits Expedition.  Initially he studied colour-perception among the islanders in comparison to Europeans (sensory perception was a preoccupation of the Cambridge psychologists at that time), but his collection of islanders' genealogical  information for genetic purposes turned his mind to ethnological and anthropological questions.  Rivers was to pursue his anthropological enquiries with expeditions to Melanesia in 1907-08 and 1914-15.  After his time at Craiglockhart, Rivers was attached to the Royal Flying Corps.  In 1919 he returned to St John's, and died on 4 June 1922 after being taken suddenly ill.

His death prompted Sassoon to write  'To A Very Wise Man':

FIRES in the dark you build; tall quivering flames
In the huge midnight forest of the unknown.
Your soul is full of cities with dead names,
And blind-faced, earth-bound gods of bronze and stone
Whose priests and kings and lust-begotten lords
Watch the procession of their thundering hosts,
Or guard relentless fanes with flickering swords
And wizardry of ghosts.

In a strange house I woke; heard overhead
Hastily-thudding feet and a muffled scream...
(Is death like that?) ... I quaked uncomforted,
Striving to frame to-morrow in a dream
Of woods and sliding pools and cloudless day.
(You know how bees come into a twilight room
From dazzling afternoon, then sail away
Out of the curtained gloom.)

You understand my thoughts; though, when you think,
You’re out beyond the boundaries of my brain.
I’m but a bird at dawn that cries ‘chink, chink’—
A garden-bird that warbles in the rain.
And you’re the flying-man, the speck that steers
A careful course far down the verge of day,
Half-way across the world. Above the years
You soar ... Is death so bad? ... I wish you’d say.


The Rivers Centre at the Royal Edinburgh Hospital is a clinic, established in 1997, for the treatment of Post Traumatic Stress Disorder.  There are several charities aimed at helping veterans with PTSD; in the UK these include Combat Stress and Healing the Wounds.


I've not left myself much room to talk about Wilfred Owen (a patient of Arthur Brock rather than Rivers).   Perhaps I shall do so come 4 November.  For the time being, here is one of his best poems, the draft of which Sassoon famously amended:-

What passing-bells for these who die as cattle?
Only the monstrous anger of the guns.
Only the stuttering rifles' rapid rattle
Can patter out their hasty orisons.
No mockeries now for them; no prayers nor bells,
Nor any voice of mourning save the choirs, -
The shrill, demented choirs of wailing shells;
And bugles calling for them from sad shires.

What candles may be held to speed them all?
Not in the hands of boys, but in their eyes
Shall shine the holy glimmers of goodbyes.
The pallor of girls' brows shall be their pall;
Their flowers the tenderness of patient minds,
And each slow dusk a drawing down of blinds.