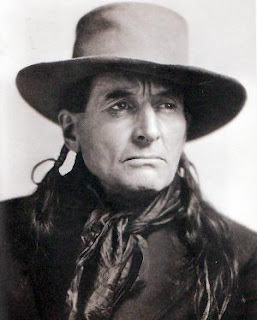 Today is the anniversary of the birth of Grey Owl (1888-1938).  He was well-known in the 1930s from a series of books and lectures extolling the Native American way of life and nature conservation, particularly of  beavers, then still hunted for their skins.

After his death it transpired that he was not the child of a Scottish father and an Apache mother born in Montreal (or the US or Mexico) as he claimed, but Archibald Stansfeld Belaney, born in Hastings, Sussex.  He had emigrated to Canada in 1906 where he became a trapper before falling in love with the First Nations.  In addition, he was a bigamist, by some accounts being married five times.

For many years Grey Owl's lies overshadowed his environmentalist message, but recently he has been re-evaluated.  He was the subject of a 1999 film by Richard Attenborough and is admired by promoters of woodcraft, such as Ray Mears.

My father heard him on an English lecture tour and somewhere I have a copy a book by him Dad owned.
at 00:29