Prince Arthur William Patrick Albert was born in London on 1 May 1850,  the seventh child and third son of Queen Victoria and Prince Albert.  He was apparently Victoria's favourite.  In 1877 he was created Duke of Connaught and Strathearn and Earl of Sussex.

He entered the Royal Military College, Woolwich, in 1866 and started his career as a lieutenant in the Royal Engineers. He spent a year with his regiment in Montreal, and served on the Red River expedition of 1870.  In 1871 he was promoted captain in the Rifle Brigade, lieutenant-colonel in 1876 and major-general in  1880.  After serving with the during the Egypt campaign of 1882 in command of the Brigade of Guards (he was at Tell-el-Kebir and was Governor of Cairo), he served in India (Commander-in-Chief Bombay, 1886-1890), Ireland, the Mediterranean and South Africa.  In 1902 he was appointed field marshal and Inspector-General of the Forces.

Prince Arthur was appointed Governor-General of Canada in 1911, the first member of the royal family to hold the office.  His tenure was dominated by the First World War and the massive contribution the country made to the war effort.

He was active in auxiliary war services and charities and conducted hospital visits, while the Duchess of Connaught worked for the Red Cross and other organizations to support the war cause. She was also Colonel-in-Chief of the Duchess of Connaught's Own Irish Canadian Rangers battalion, one of the regiments in the Canadian Expeditionary Force.  She also acquired a knitting machine and made socks for the troops.

Connaught's tenure as  Governor-General came to an end in 1916.  The Prime Minister, Robert Borden, gave a mixed review of him, considering that he over-stepped his constitional role, having 'laboured under the handicap of his position as a member of the Royal Family and never realised his limitations as Governor General.'  He was succeeded by an experience politician, the Duke of Devonshire.

Prince Arthur continued to carry out duties as a minor royal he withdrew from public duties in 1928.  He was a freemason, being Grand Master of the United Grand Lodge of England, 1901-1939.  He was president of the Boy Scouts Association.  He died at his home, Bagshot Park, on 16 Jan 1942, aged 91 years and 8 months.  He was succeeded by his grandson Alastair who died in shady circumstances the following year - the title becoming extinct. On 13 Mar 1879 Connaught married, Princess Lousie Margaret of Prussia, daughter of Prince Frederick Karl of Prussia (who is said to have beaten her mother so hard for giving birth to a daughter as to permanently deafen her).  The Duchess died of influenza at Clarence House on 14 Mar 1917.  She was the first member of the royal family to be cremated, and was interred at Frogmore.

Princess Margaret married Prince Gustaf Adolf of Sweden in 1905, becoming Crown Princess in 1907 when his father acceded to the throne.  Gustaf succeeded his father in 1950, but Margaret had died in 1920.  Her grandchildren include King Carl XVI Gustaf of Sweden, Queen Margrethe of Denmark and Queen (consort) Anne-Marie of Greece.

Prince Arthur served as an army officer in the Boer War and First World War, reaching the rank of major-general.  He married his cousin, Princess Alexandra, Duchess of Fife, in 1913.  He was Governor-General of South Africa, 1920-1924, and died in 1938.

Princess Patricia married Capt (later Adm Sir) Alexander Ramsey, son of the Earl of Dalhousie, and an aide-de-camp of her fathers' in 1919.  She relinquished her royal titles 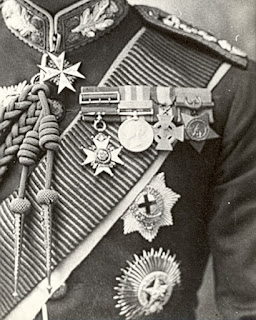 From the Oxford Dictionary of National Biography:-

The duke had received every order which it had been in the power of his mother to bestow, and had received further decorations from Edward VII and George V, and from many foreign powers. He presided over many organizations, including the Royal Society of Arts, the Boy Scouts' Association, and the united lodge of freemasons, and was colonel of three, and colonel-in-chief of nineteen, army regiments.

Royal Victorian Order
Order of the British Empire
Venerable Order of St John
Bailiff of Egle from 1894 and Grand Prior of the Order from 23 June 1910 to 1939.