Listening to a radio programme on the expulsion of Ugandan Asians by Idi Amin has reminded me of some work I did on Alan Webster (1918-2007), Dean of Norwich (1970-1978) and Dean of St Paul's (1978-1987).  While some cities were taking out adverts telling the Asians not to settle there, Webster (then Dean of Norwich) set aside a house in The Close in order to welcome refugee families - one of Webster's sayings was that The Close should be renamed 'The Open'. 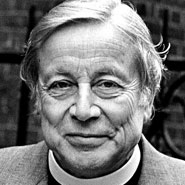 Alan Brunskill Webster was born on 1 July 1918 in Wrenbury, Cheshire, son of the Rev J. Webster. He attended Shrewsbury School and studied Modern History at Queen's College, Oxford (BA, 1939 and MA, 1943). He subsequently entered the theological college Westcott House, Cambridge, where he came under the influence of the principal, B.K. Cunningham and Launcelot Fleming. He was awarded a BD in 1954 and an honorary DD by City University in 1983.

Webster was ordained deacon in 1942, serving his curacy in Sheffield parishes, and priest in 1943. He remained in Sheffield until 1946, where he was influenced by Bishop Leslie Hunter and Alan Ecclestone and their vision for the Church of England to be 'loved into new life so that it could be once again the moral and spiritual centre of the whole community' [Times obituary].

From 1946 to 1953, Webster was chaplain and vice principal of Westcott House, where his students included the future Archbishop of Canterbury, Robert Runcie. In 1951, he married Margaret C.F. Falconer, who was working in the study department of the SCM. He was the first member of the Westcott staff to marry and have children. He introduced a more liberal approach to married students and their needs. He left Westcott in 1953, becoming vicar of Barnard Castle in the Diocese of Durham (the bishop at the time being Michael Ramsey). Runcie succeeded him as vice principal of Westcott.

In 1959 Webster became warden of Lincoln Theological College, where he initiated Anglican-Methodist dialogue, introduced women students and arranged for lectures by Roman Catholic theologians. From 1964 to 1970 he was a canon and prebendary of Lincoln Cathedral.
In 1970 he was appointed Dean of Norwich, initially working alongside Bishop Launcelot Fleming, but from 1971 with Bishop Maurice Wood, a conservative evangelical with whom Webster was sometimes at odds. Webster's vision for a cathedral community was to be an inclusive centre for city and diocesan life. While at Norwich he put into effect many of his social teachings, establishing a night shelter for the homeless, housing refugees from Idi Amin's Uganda in The Close and supporting clergy expelled from Apartheid-era South Africa. Webster also developed a personal devotion for Dame Julian of Norwich, one very much in keeping with his views on women's rights and on the necessity for the ordination of women. 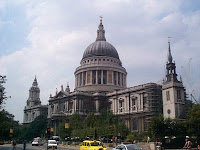 In 1978 Webster became Dean of St Paul's Cathedral. His tenure there, until 1987, coincided with the height of the social campaigns by the liberal wing of the Church of England and the crisis of church/state relations brought about by opposition to policies of Mrs Thatcher's Conservative government. Webster
was involved with anti-Apartheid campaigns, issues relating to social exclusion and the implementation of the Faith in the City report (published in 1986).  Perhaps the most direct point of conflict between church and state came with the service held at St Paul's to commemorate the end of the Falklands War at which Runcie (now Archbishop of Canterbury) preached a conciliatory sermon. Webster was adamant that this should not be a victory celebration and suggested several elements to emphasise this, including the recital of the Lord's Prayer in Spanish. One Conservative MP commented that 'it is wrong for cringing clergy to misuse St Paul's to throw doubt upon the sacrifices of our fighting men'.

Within the church itself, Webster had become a leading advocate of the ordination of women to the priesthood. In this, he worked closely with his wife, Margaret, who was executive secretary of the Movement for the Ordination of Women (MOW) from 1979 to 1986. In 1982 Webster earned the rebuke of Graham Leonard, Bishop of London, for hosting a eucharist irregularly celebrated by Elizabeth Canham, an English woman ordained in the United States.

Webster was a member of the Crown Appointments Commission, the perceived liberal bias of which was a factor in the 'Crockford's Controversy', seen as severely damaging Robert Runcie's leadership. Webster's own view was that the presence of the Prime Minister's patronage secretary put more radical candidates at a disadvantage.

Webster's activities did little to endear him to a divided chapter at St Paul's. In 1984 an unsuccessful attempt was made to force his retirement. When Webster did retire, he was not appointed Dean Emeritus of St Paul's until after the tenure of Bishop Graham and his equally conservative successor, Bishop Hope.