The press are reporting new moves to repatriate the Koh-i-Noor diamond to the Punjab.  This is nothing new - the Indians requested the diamond’s return in 1947 and again in 1953, the year of the coronation of Queen Elizabeth II. Then, in 1976, Pakistan joined in, asserting its ownership of the gem.  Further claims were made when the Queen made her state visit in 1997, and David Cameron squashed similar demands as recently as 2010.

So this comes up every so often, but it's a good excuse to write about a nice bit of glitter.  It also prompts me to put a post on Duleep Singh onto my to-do list, so watch this space. 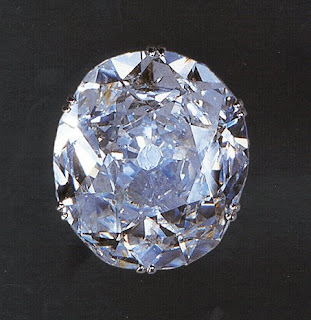 The Koh-i-Nor was acquired by the Crown in 1850, when Duleep Singh ceded it following the East India Company's conquest of the Punjab - as laid out in a clause of the Treaty of Lahore.  The argument for repatriation is that Duleep Singh didn't have the authority to alienate a part of Punjab's patrimony.  However, the diamond had only been in the Singh's hands for a generation.

The early history of the jewel is unclear.  It may have been discovered in the twelfth century, but the first confirmed mention is when it was acquired by Babur, the first of the Moguls, in 1526.  It was known as 'Babur's Diamond' for the next 200 years.  At some stage it was mounted in the Mogul's Peacock Throne.  The throne formed part of the booty taken by Nadir, Shah of Persia, following the fall of Delhi in 1738.  At that time it was described thus:

in form like one of our field beds, six feet long and four broad. The cushion at the base is round like a bolster: the cushions on the sides are flat. The underpart of the canopy is all embroidered with pearls and diamonds, with a fringe of pearls round about. Upon the top of the canopy, which is made like an arch with four panes, stands a peacock with his tail spread, consisting all of saphirs and other proper colored stones. The body is of beaten gold enchas'd with several jewels, and a great ruby upon his breast, at which hangs a pearl that weighs 50 carats. On each side of the peacock stand two nosegays as high as the bird, consisting of several sorts of flowers, all of beaten gold enamelled. When the king seats himself upon the throne there is a transparent jewel with a diamond appendant of eighty or ninety carats, encompass'd with rubies and emeralds, so hung that it is always in his eye. The twelve pillars also that uphold the canopy are set with rows of fair pearl, round, and of excellent water, that weigh from six to ten carats apiece. This is the famous throne which Tamerlane began and Cha Jehan finish'd, which is really reported to have cost 160 million and 500,000 livres of our money.

On Nadir's assassination in 1747, the jewel was acquired by Ahmed Abdali, one of his generals, who on the break-up of the Persian empire became Emir of Afghanistan as Ahmed Shah Durrani.  The Durrani empire was no more stable than any other in the region and following more bloody adventures the diamond left the country with Shuja Shah Durrani in 1813.  It was seized from him by Ranjit Singh, the 'Lion of the Punjab' in return for help in regaining the Afghan throne.  It was Ranjit's son, Kharak Signh who was deposed by the British.   The Koh-i-Noor was presented to Queen Victoria by the 13-year-old Duleep Singh in 1850


The stone weighed in at just over 186 carats, but was disappointing in appearance to western eyes.  Lord Dalhousie, who had enforced the Treaty of Lahore, said 'the Koh-i-Noor is badly cut - it is rose-cut, not -brilliant, and of course won’t sparkle like the latter.'  The diamond was displayed at the Great Exhibition, where it received a mixed review from the Times:-


The Koh-i-noor is at present decidedly the lion of the Exhibition. A mysterious interest appears to be attached to it, and now that so many precautions have been restored to, and so much difficulty attends its inspection, the crowd is enormously enhanced, and the policemen at either end of the covered entrance have much trouble in restraining the struggling and impatient multitude. For some hours yesterday there were never less than a couple of hundred persons waiting their turn of admission, and yet, after all, the diamond does not satisfy. Either from the imperfect cutting or the difficulty of placing the lights advantageously, or the immovability of the stone itself, which should be made to revolve on its axis, few catch any of the brilliant rays it reflects when viewed at a particular angle

The decision was made to re-cut the diamond, and Messrs Coster of Amsterdam were given the job, the first cut being done by the Duke of Wellington. Thirty-eight days and £8,000 later it emerged as an 'stellar brilliant' weighing just under 109 carats.  Prince Albert was unimpressed by such a radical reduction and said so in the clearest terms.  In 1853 Garrards mounted it in a tiara for the Queen which contained more than two thousand diamonds. Five years later Queen Victoria ordered a new regal circlet for the Koh-I-Noor which they delivered the following year.

Then in 1911 Garrards made a new crown which Queen Mary wore for the coronation: it contained only diamonds, among them the Koh-i-Noor and the Cullinan III and Cullinan IV. It could be worn as an eight half-arch crown or a circlet.  For the 1937 coronation a new consort's crown was created for Queen Elizabeth, which similarly could be worn as a crown or circlet, and the Koh-i-Noor transferred to it. The Koh-i-Noor is set in the maltese cross at the front of the crown.